Fortnite‘s rocket will launch earlier than expected, and Epic has even officially announced when you can watch it. The “New Updates” screen for Battle Royale is teasing the event ahead of time, saying you should be in a match on Saturday by 10:30 am PDT / 1:30 pm EDT / 6:30 pm BST to see it yourself. And make sure you’re ready, because it’s only going to happen once! 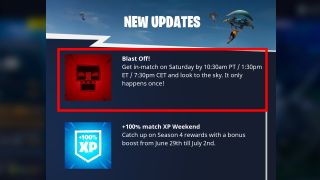 It’s pretty rare to get a truly one-time-only event in an online game like this so we’ll definitely be watching with interest. Especially because Fortnite season 5 still isn’t set to begin for several weeks after the launch; what kind of strange events will unfold in the final days of season 4?

This week people found you could make all Fortnite’s TVs say ‘Launch’ ominously just by changing the in-game clock on your PS4, or PC. Those are the two confirmed so far but it’s the same game on all formats so Xbox One and Switch will likely achieve the same results.

As you can see in the video all you need to do is change the clock settings to July 1 and you’ll find ‘Launch’ ominously flashing on the TVs you can find in the game. The hologram in the Evil Villain’s lair previously showing the missile will also disappear. Interestingly, if you go back an look at the TVs in a replay after changing the date back you get a default static countdown image. 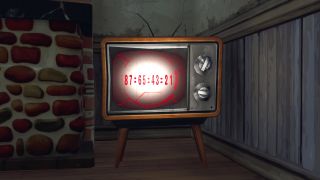 But what does that actually mean? The lair hologram briefly showed a countdown in Fortnite on Switch, but that seems to have been accidental and stopped without anything happening. However, that countdown was for three days which would line up perfectly with something changing in this Thursday’s update as it’ll then be three days until July 1on Sunday.

So why does changing the clock affect the TV and hologram but nothing else? Likely because they’re minor things that only involve an image and no major map or geometry changes. It’s such a little addition that it would be hard for data miners to unearth it and could easily be slipped in ahead of time, unnoticed. Anything larger like, say, a massive missile hanging in the air, or a new crater on the map, would require a far more substantial and obvious update that would be found straight away. Those sort of likely won’t be deployed until much later.

Fortnite’s Infinity Blade has been Vaulted