As much as Willie Nelson likes to sing about them, road trips aren’t always the perfect getaway. Driving along the open road, sharing precious moments with friends, and taking in the landscape as your favourite tune blares through the radio; these parts are pure bliss. But there’s also the standstill traffic, the lack of any home comforts, and the ever persistent worry of finding yourself stuck in the middle of nowhere, with nothing of interest to do. In that way, The Crew 2 successfully earns its self-proclaimed honour of being the ultimate road trip game, capturing that potent mix of highs and lows which are an inevitable side-effect of being stuck in a moving hunk of metal for several hours at a time.

First things first, for those who were wondering; yes, The Crew 2 is a marked upgrade from its predecessor, and you can tell as soon as the brilliantly Inception-esque opening mission kicks off. Everything’s brighter and bolder here, not just in terms of the vivacious tone and crisper visuals, but in the restructured gameplay design, which has all been crafted to ensure fun stays firmly at the centre of the experience. The sky (and sea) are now quite literally the limit, as planes, boats, hovercrafts, and helicopters have all been added to The Crew’s extensive garage of vehicles, bringing a host of new, real-world inspired racing and freestyling disciplines into the mix.

If you want to play The Crew 2 as an offroad motocross game, you can do that, taking part in down and dirty bike races or cross country time trials. More interested in exploring another Ubisoft open world™? No problem, the entire nation is your oyster, alongside a checklist of non-racing themed side activities to tick off with obsessive glee. You can even play The Crew 2 as a realistic racing sim, complete with customizable settings and a suite of third and first-person perspectives to immerse yourself in. 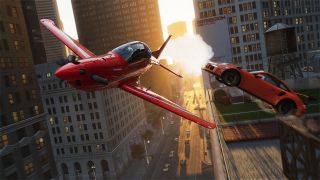 And every vehicle type can be switched between effortlessly via The Crew 2’s new Fast Fav mechanic, which lets you turn into your favourite land, sea, or air ride at the touch of a button. There’s no pausing, navigating the menus, and waiting for your new automobile of choice to spawn in; it’s all integrated seamlessly into the gameplay itself, and it’s brilliant.

In fact, Fast Fav is such a genuinely refreshing addition to the racing genre, that I’m even a little confused as to why developer Ivory Tower didn’t incorporate the mechanic into The Crew 2’s Main Events more holistically. It’s great for navigating America’s diverse terrain and engaging in omni-vehicular experimentation, but more Events that make use of Fast Fav as a gameplay tool – such as the rare Live Xtrem Series races – would have helped The Crew 2 stand out even more against its contemporaries.

In better news, you needn’t worry about any shoehorned soap operas this time around. Ivory Tower has listened to its critics of The Crew and done away with trying to cram a hokey crime drama into a sandbox racer, wisely keeping things straightforward with the tale of an unnamed avatar simply looking to become the best racer in the USA. The storytelling comes across as a little half hearted in places (your main rivals are barely given a speaking role), but having each racing discipline represented by a different Fast & Furious style ‘family’ smartly structures gameplay and narrative into a more cohesive whole 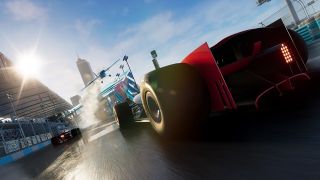 It takes around 40 minutes to drive from San Francisco to New York in game, so to say The Crew 2’s America is an accurate representation of the real country would be too flattering a compliment, but it is the next best thing. Almost every major city is here, and Ivory Tower has effectively captured the spirit and atmosphere of each to morph them into playgrounds catered to speed and momentum. Whether you’re bombing it down the Las Vegas strip, cruising along the California coast, or simply enjoying the New York skyline from a biplane, the United States looks dazzling no matter where you are in The Crew 2, even if a closer inspection at the flat textures can begin to peel away at the artifice.

You can be having such a great time competing against AI in The Crew 2 that it’s easy to forget Ubisoft always intended the series to be a social experience above all else, and this sequel is no different. The eponymous Crews (not of the Terry variety, sadly, he’s too preoccupied with Crackdown 3) return but, more than anything, they’re just shorthand for parties, allowing you to join your friends’ world and compete in Events together, sharing in the rewards.

I was never not impressed by the ability to instantly transport over to my crew mates’ starting line whenever they booted up another race, and it’s always fun to ride around the land of the free together, but I do wish there was more of a competitive element to the online interaction. There may be leaderboards and league tables, but I never felt like my crew had any meaningful clashes against any others, which is a shame when the very concept of racing crews implies precisely that. 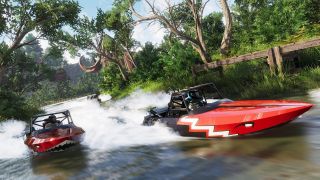 This shared world focus does mean The Crew 2 needs to be online at all times, which seems to frequently slow things down as the game loads in assets during various intervals, such as when opening the map or browsing vehicles in the store. It’s also worth mentioning that there are microtransactions segued into the core experience, letting players spend real money to buy more of The Crew 2’s premium currency for purchasing vehicles, upgrades, and other items. It’s not explicitly pay-to-win, but I can certainly see this two-fold economy helping frugal players acquire better vehicles at a faster pace than those who knuckle down without paying an extra dime.

By trying to juggle between several racing subgenres at once, The Crew 2 manages to be great at simulating all of them, but excellent at none. It’s weakest as a racing sim, where the bouncy physics and total lack of damage effects tend to undermine any sense of hard realism. Similarly, boat racing is fun in short bursts, but lacks strategy beyond going as fast as you possibly can, rendering them as more of a useful navigational tool to compliment Fast Fav rather than a rich side hobby to get stuck into.

Ultimately, The Crew 2 wants to be a game for everyone, but its lasting appeal lies with casual racing game fans above all else. New ideas like Fast Fav are proper game-changers left with untapped potential, and the decision to keep it online only is still as annoying as it was in 2014. Compare it to the Forza Horizons and Gran Turismos of this world, and you can see where The Crew 2 falls short, but taken on its own terms, it’s a breezy summer getaway that, like all good road trips, is best enjoyed with friends.

The 10 best video game movies of all time