Skull and Bones – the pirate sim from the creators of Assassin’s Creed – is coming to PS4, Xbox One, and PC in 2019. You can check out the latest gameplay trailer for Skull and Bones below, as the game has been shown at Ubisoft’s E3 2018 press conference. It’s a persistent, shared-world game – meaning it’s like Sea of Thieves or Destiny, where everyone is playing in the same space. There’s a demo too, so expect our hands-on impressions very soon. Right now, though, there’s plenty to talk about including customisation, stealth gameplay (yes, in a ship), and the idea of allies and enemies.

Skull and Bones release date – when is it coming? 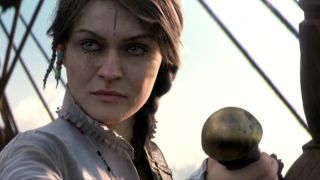 Skull and Bones is due in an irritatingly vague ‘2019’ window, which means we may not get to play it for over a year. At worst, it could be coming at the end of 2019. One thing that keeps us hopeful is that you can already sign up for the Beta, so they’re at least thinking of letting the general public play it soon. Ish. Here’s where you sign up for the Skull and Bones Beta. The game was originally due to release in 2018, when it was revealed at E3 last year, but that has obviously slipped back.

Skull and Bones gameplay – what will we do? 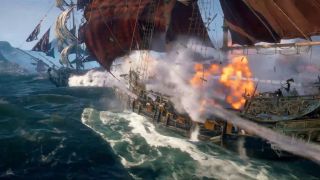 Crudely, Skull and Bones gameplay is all about sinking other ships. The subtlety is in the method and the reason. You’re essentially out there to get loot and become a powerful pirate – the trailer makes many references to getting to the top of the food chain. Sailing works similar to how it does in Assassin’s Creed 4: Black Flag – you steer around the ocean, then shoot cannons at other boats. There are different types of shot, which allow you to cause damage to other ships or take out their ability to sail or shoot back. Each boat can be fitted with a special ability now so, for example, you can have a cannon that fires eight shots in one volley, or the ability to fire without waiting for a cooldown.

You’ll have different ways of sailing too. We see in the demo that you can disguise yourself as ships from different factions, and you can set your sails for speed, rather than combat or the ability to manoeuvre.

The idea, however, is that you can team up with other pirate ships and combine your various abilities to take down the really big enemies and claim maximum loot. You’ll need to buddy up to sink the big warships, even if you’re powered up yourself. The only problem here is that alliances are fluid in Skull and Bones, so you may find that your team mates turn on you when it’s time to divide the treasure.

Skull and Bones trailer – where can I watch it?

There’s a new trailer from E3 2018, and you can watch it above. It sets the tone for the game and gives us a taste of some of the characters and customisation options we’ll have in the game. And it’s pretty damn exciting too… 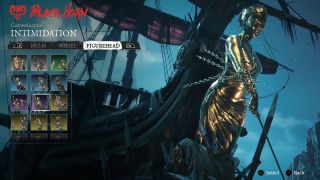 There are loads of ways to customise your ship in Skull and Bones, and it seems that different set-ups will be useful for different scenarios. We see the ability to change sails, weapon set-ups, and figureheads in the demo, but expect there to be loads more options in the final game.

You’ll need to adapt because the conditions of the game will change according to the predictions of a fortune teller. Yes. You’re given an outlook for each session and will have to change your play accordingly – so, for example, high winds mean that there are more merchant ships to plunder, but greater competition for them. Not sure how that correlates, but it’s all in the demo. She’ll also advise on weather and trade routes too.

It’s worth noting that you can also hop off your ship and look around your own private island. Expect there to be plenty of distractions here too. 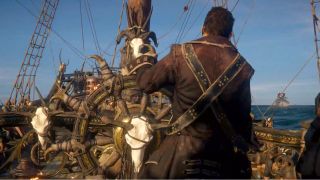 Weather will play a role in Skull and Bones too. We see in the trailer that the pirate crews encounter a massive typhoon. Expect there to be rough seas, high and low winds, and maybe even lightning storms to contend with too.

And then there’s the kraken… We saw the kraken at E3 in 2017, but it didn’t show up in the latest footage or trailer. It’s probably still in the game but we noticed that the gameplay has changed (and evolved) significantly since last year, so perhaps all the over-the-top stuff has gone. Probably not, though.

For The King – Review (Steam/PC/Mac/Linux)