Things I was expecting to get from a long playthrough of Resident Evil 2 Remake: a fun trip down an undead memory lane; revisiting vastly improved, prettier versions of familiar places and set pieces from a treasured classic. Things I was was notexpecting: to forget all that because oh God I’ve run out of ammo and there are zombies everywhere and why does it keep making things worse when I try to run?

Although realistically that last bit is what I remember from the original game. Everyone talks about Leon and Claire, the zombies, the police station and so on, but the main memory is that sense of pressure the game created – of having a handful of bullets and no healing, so every new area you entered led to a split second call to fight or run. And how running usually took you into an area that was worse. A cycle that continued until you either hit the blessed relief of a save room, found some more precious ammo, or just plain died. This remake completely nails that.

It’s an interesting spin on the recent slew of remasters. While current revisits to old classics like Spyro Trilogy Reignited or Shadow of the Colossus aim to carefully preserve the original, by stretching beautifully updated visuals over old bones, Resident Evil 2 has made something completely new, from scratch, that so far recaptures the absolute essence of the original without a beat by beat breakdown. There are no more tank controls to steer Leon or Claire, no more pre-rendered backgrounds and fixed cameras, but somehow this still preserves the claustrophobic sense of dread teenage me remembers from entering a room full of zombies on the original PlayStation.

The new camera uses Resident Evil 4’s tight over the shoulder angle for example, cutting your view right down as you manage threats from hidden angles; rooms and corridors feel just that bit too tight, so you’re always on the back foot, and ammo and healing herbs are always just plentiful enough to lull you into a false sense of security, until they’re gone and one lone zombie suddenly becomes a serious threat. 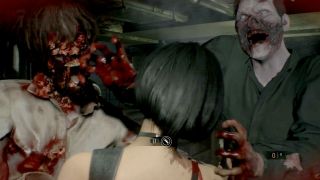 The Resident Evil 2 Remake’s new take on its Raccoon City streets, sewers and police station almost has a theme park feel to them. It’s a very pretty game, with a crisp, pristine feel to the grime on the walls and gore-caked chunks hanging off undead bodies. In the early, easier stages half the attraction is the ‘Ewww’ close ups you can get of zombies’ mashed up faces, or realising you can blow limbs off – it’s brilliantly gross in a 4K ‘jam for blood’ way that kind of makes you laugh, kind of makes you feel a little bit sick. There’s just something about a glistening wet face, devoid of skin and full of teeth that draws the eye. Every zombie here is a gross out star made of lolling expressions, mangled flesh and murderous intent. 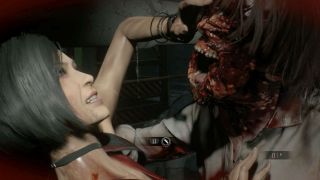 But as I mentioned before, there’s real fear and stress to be had when the game bares those teeth. Some stages are ‘fun’ horror, the kind of jump scares and gut-splosions that make you flinch and laugh in equal measure. But there are also some genuinely tense sections that leave frayed, and in need of a breather once it’s cleared.

A section with Clair trying to escape the Raccoon City Police Department springs to mind here. While it starts easily enough – just zombies and lickers to deal with – as you get closer to escape Mr X, the T-100 Tyrant sent in by Umbrella to clean up loose ends, appears. He’s got the whole Terminator ‘never giving up and impossible to kill’ thing going on and relentlessly hounds you through the building, The best you can do is stun him for a few valuable seconds and run, giving you a brief respite before the stompy footsteps start again as a prelude to him bursting through the door.

The Tyrant’s pursuit is relentless and what starts as a minor inconvenience (Urg, he’s back again) unravels into near collapse (why won’t it stop? Whywontitstop? WHYWONTITSTOP). It’s a fraught game of cat and mouse as you balance evasion, puzzle solving and zombies against a background of stomp, stomp, stomping skull crushing death constantly bearing down on you. 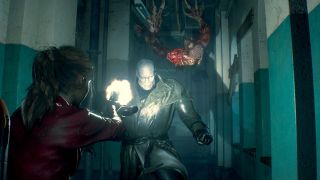 Where things do deviate from the original games it does so in interesting ways that don’t feel out of place and add some freshness to an otherwise well known story. Ada Wong is now a playable character, with a hacking multitool to help her fritz locks open and solve puzzles. And there are other things I don’t want to spoil that mean this is totally the Resident Evil 2 you remember, but full of surprises.

Throughout it’s an enjoyable body horror heavy blast so far. From watching zombies fall apart under gunfire, to the various creative ways you can die (there is a lot of chewing). But the most impressive thing is how this feels so new and modern, while absolutely channeling the spirit of the original. So far, the ‘Remake’ idea is totally working in its favour. Now… let’s talk Dino Crisis next, eh, Capcom?

1057 hours on Destiny?! Sony’s My PS4 Life shows you how many hours you’ve spent playing PS4 games this generation

Caper Forecast Is Stupid With a Chance of Bonkers