Designed specifically for gaming, the Razer phone 2 is big, bright, and a little impractical to actually use

The very existence of the Razer phone 2 is a curious one. To many, the idea of buying a phone primarily for gaming may seem strange. After all, most modern smart phones play games perfectly well, with even the most demanding apps failing to really push the hardware in most people’s pockets. And while mobile games have come on leaps and bounds, they can’t hope to match whatever you play on the Switch or even most tablets. The Razer phone 2 is not only marketed as a gaming phone, but it’s specifically designed to maximize the potential of the games you play on it.

In that sense, it’s a real success with only a few pesky caveats. This genuinely is the best phone for gaming right now – and tops the list of our best gaming phones – but for day to day use it’s merely average. Every part of the design is here to enhance how you play, from the big and beautiful 5.7” touchscreen to the 2.8GHz Snapdragon processor to the superb Dolby Atmos speakers. This design philosophy, however, has an impact on how the rest of the phone performs and feels to use. So, the question here isn’t how good the Razer phone 2 is, but rather what you actually want to use it for.

The design and overall feel of the Razer phone 2 is very consistent with the Razer brand. That’s to say, square edges, lovely solid materials, and a glowing chroma symbol on the back of the unit. It feels sturdy and chunky, perfect for taking anywhere in the world and settling in for a two-handed, all-attention-focused-on-screen gaming session. The phone is waterproof too, so you can play it outside even in light rain.

On the flipside, having such a chunky phone means that it’s near-impossible to use with one hand, unless you’re a giant. So, quickly checking messages, or whipping the phone out for an impromptu photo or selfie is pretty difficult, and not something that can be done idly. You have to be ok with not being able to hold the phone and swipe from top to bottom with your thumb. 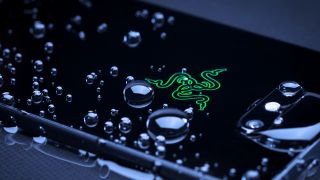 In terms of other features, the fingerprint scanner is extremely well placed on the side of the phone. Android phones have always struggled with fingerprint ID, because unlike the iPhone, most don’t have a central ‘home’ button. Here it’s down the side. The scanner is also the Razer phone 2’s standby button, and once you get accustomed to the placement, it works extremely well. The volume buttons, which are raised slightly from the unit (and odd design choice, actually, as everything else is  flush to the side) sit in the centre, so they can be easily accessed in landscape or portrait mode – again, to make the phone more friendly for gaming.

Finally, there’s a charging port at the base… and no headphone jack. Controversial subject. For a phone that’s tailor made for gaming, we’d expect the ability to connect wired headphones, despite the fact it compromises waterproofing, so this is a mark against the Razer phone 2. Not everyone can afford or wants wireless headphones.

This phone’s stand-out feature is undoubtedly its 5.7” screen, which can handle a resolution of 1140×2560 pixels at 120Hz, and allows HDR display for games and movies. And it’s a gorgeous, tough screen, showing off the games we test with in beautiful clarity and vibrancy. PUBG looks as good as it’s going to get on the small screen, and the colors really pop in the pair of MCU movies we watch (Thor: Ragnarok and Captain America: Civil War). If you’re wondering, no, it doesn’t play Fortnite mobile. The only real problem with the Razer phone 2’s screen is the edges. The screen itself displays in the 16:9 ratio, and there’s a definite black border around the edge, making it feel rather dated next to most of the phone’s competitors, like the Galaxy S9 Plus. It may seem like a small complaint to not have an edgeless screen, but it makes a big difference when you’re watching TV shows and playing more cinematic games.

Size matters when it comes to gaming phones, and the dimensions and placement of the screen here is excellent. It’s perfect for landscape-mode, two-handed play, and there’s enough width here that you can comfortably operate games with both hands while in portrait. As you’d expect, the glass feels tough and responsive, and the increased size of the unit also means you’re less likely to bring up Android overlays while you play. 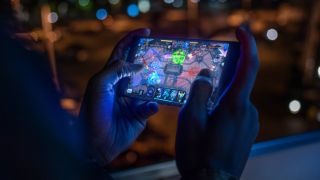 Moving on to sound, and the speakers here are excellent. Even when you’re playing without a pair of headphones, you get wonderfully clear audio through the dual speakers. With headphones on, the sound quality you get is great too, although this is mainly down to the capabilities of your cans rather than the unit itself. You do need to go wireless, as mentioned above, but this is simple to set-up and the Bluetooth connection is pretty solid.

The built in camera is ok. It’s fine. There’s a 12MP camera at the rear, and an 8MP front-facing lens. While it does produce sharp images, especially of still objects, it still doesn’t handle motion particularly well, and competitor phones – like the Huawei P20 Pro and the Samsung Galaxy S9 have far superior cameras and image-manipulation software. Again, these are roughly the same price too, if a little cheaper if you go handset only.

Let’s start with the good. The processor in here is fast, so there’s no problem running the biggest, most advanced games at full resolution. We tried a variety – from shooters to RPGs to simple casual puzzle games, and they all looked great. Something like Battle of Polytopia ran like a dream, even with maximum tribes all at war, and the screen made the primary colors really pop. There was some image cropping, however, and that 16:9 aspect ratio doesn’t play well with some modern games that don’t or can’t adapt. We ran multiple apps all at once, and everything was smooth and efficiently done.

What impresses most, actually, is the battery. Even under heavy use, it lasts about ten hours, and with rapid charging you’re ready to go again in just under two hours. That’s impressive, and the Razer phone 2 does support wireless charging too, which is a neat touch. The efficiency and versatility of the batter is a massive boon over competitor phones, and of course with the Android OS, you do get the option to optimize your phone’s resources and usage, and change all kinds of options to make it better for gaming and media. While we’re talking about the OS, I found the Razer’s version of Android a little trickier to navigate than on other phones, especially with the default icons which are all an unpleasant shade of green. Hey, it’s a tiny issue, but when you’re using the phone every day it’s cosmetic stuff like this that can impact how you feel about your device. 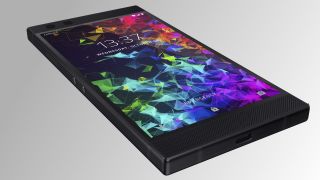 Overall – should you buy it?

There’s no doubt that the Razer phone 2 is a decent piece of tech. If you’re looking for a phone that handles gaming and media, especially TV, then this is a strong contender because everything is geared towards those two activities. The screen is big and bright, and the processor inside is quick. Another advantage is the excellent Dolby Atmos sound, especially if you’re going to be playing without headphones, and the battery (plus rapid charging) mean you’ll be able to use this handset heavily, without too many trips to the wall-socket. However, as an actual phone, there are better models out there, for cheaper prices. The screen isn’t edgeless, the handset is a little too chunky for everyday use, and the camera is middling. It’s a well made device, sure, but it lacks some really useful features, like that headphone input. For mobile gamers, who want a primo experience with PUBG, yes, this is a great option. For anyone less serious about gaming and more about everyday use, you should stick with Android but look elsewhere.

The 10 best video game movies of all time