Equipped with one of the best displays and keyboards ever seen on a laptop, you can finally take your desktop gaming and work experience on the road.

There’s always been a distinction between gaming laptops and desktop replacement laptops. Both types of systems can drive a complete PC gaming experience, but the latter are often too bulky and heavy to be considered portable.

Now, the Razer Blade Pro is out to prove that desktop-like power in a thin and light package is possible. The laptop comes with a quad-core Intel Core i7 processor and Nvidia GTX 1080 graphics, a 17-inch 4K display and 32GB of RAM standard – all while measuring only 0.88-inches thick.

Razer’s latest 17-inch Blade Pro is a superior gaming machine that can practically replace any desktop rig. And, even in spite of the astronomical starting price of $3,699 or £3,499 (about AU$5,070), we would pick this beautiful machine as our desktop replacement over all others. 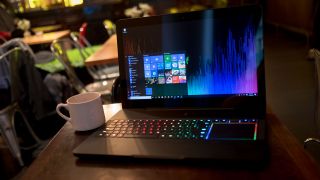 If the all-black, unibody CNC chassis looks familiar, you’re not going crazy. It has an anodized finish fused to an aluminum chassis that should feel familiar to anyone who has handled an Apple product before. That said, unlike Apple, this hardware maker has stuck to its guns by still including a stylish, light-up logo on the laptop lid, which can be customized or turned off completely via Razer’s Synapse software.

All-in-all, it’s visually identical to the design you’ve seen on the Razer Blade, Razer Blade Stealth and even the 2015 Razer Blade Pro.

Comparatively, even the recently slimmed down Alienware 17 weighs in at 9.74 pounds (4.42kg), being nearly half an inch thicker. For the last few weeks, we’ve been toting around a back-aching, 8.6-pound (3.9kg) Origin EON17-X as our desktop replacement.

After exchanging it for the Blade Pro, a veritable weight had been lifted from our shoulders. 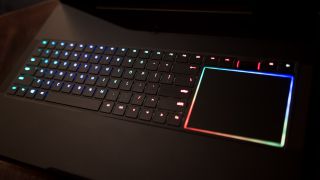 Crack the laptop open, and you’ll find keyboard deck layout unlike most laptops you’ve seen before.

Rather than positioning the trackpad beneath the keyboard, the Blade Pro’s pointing device is beside it on the right-hand side. More than once, we found ourselves tickling the surface below the keyboard, but it doesn’t take too long to get over this phantom pain.

In fact, within an hour of playing with the Blade Pro, we were accustomed to the trackpad’s new placement, and can say it is the best one we’ve used on a laptop this year.

Those that remember the first iteration of the Blade Pro might recall that this same space was once occupied with a digital touchpad and an optimistic, but ultimately flawed, Switchblade UI. However, this time around Razer has kicked the troublesome interface for an oversized glass-lined surface for slicker cursor movements and more space to move around.

The taller, squarer shape makes scrolling a breeze. It’s an arrangement that feels familiar if you’re used to having your mouse next to a keyboard and it’s also far more convenient to use than a trackpad positioned between the wrist rests. 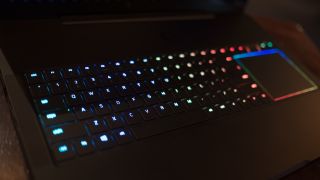 As cool as the Blade Pro’s trackpad is, let’s not overlook the keyboard. It may look like the standard chicklet layout we’ve seen on past Razer devices. But, tap on any of the keys, and you’ll feel and hear the sweet sound of a mechanical switch.

For the first time, Razer has implemented its Ultra-Low-Profile Mechanical switches on a notebook – after their debut on an iPad Pro keyboard, of all places – and they feel spectacular.

Keys sink in with a tactile and satisfyingly audible click. In addition to having a true actuation and reset point, the switches help the keyboard feel more like the one you’d find attached to your gaming rig at home.

MSI may have been the first to ramshackle a mechanical keyboard onto the MSI GT80 Titan, but Razer solution is more elegant, takes less space and is actually designed for a notebook. 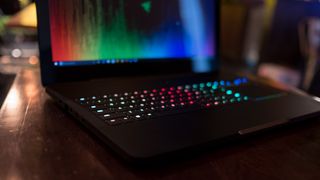 The only thing we wished Razer would include with these key switches is a tiny bit more travel for a crisper typing experience.

As ever, Razer’s completely customizable Chroma lighting scheme makes its return with 16.8-million colors, and this time, it’s been expanded to the track lighting around the touchpad. On top of individually tweaking the colors on each key, you can now set up a rainbow to run a ring around the pointing device.

The colorful customization is a welcome addition, otherwise the Blade Pro’s interior most notable feature would have been the two fat, featureless slabs of aluminum above and below the inputs. 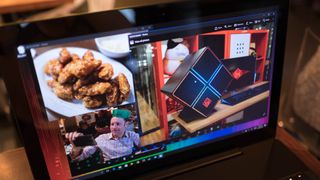 The Razer Blade Pro’s most alluring feature is its 17.3-inch IGZO display which, beside the 4K resolution, also supports 100% of the Adobe RGB spectrum, multi-touch control and Nvidia’s frame rate-smoothing G-Sync tech.

Few other gaming laptops come with a screen that’s as full featured – the only glaring omission being a 120hz refresh rate seen on some other Pascal-powered rigs. More importantly, nothing short of an OLED panel on the Alienware 13 can match an IGZO monitor’s ability to produce vibrant colors and pitch black levels of contrast. 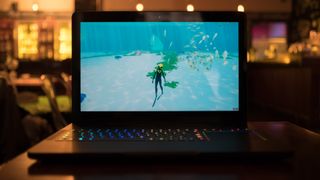 Thanks to these features, the Razer Blade Pro lends itself to be just as good at rendering beautiful game worlds as it is for accurately color correcting videos.

The Blade Pro also happens to be equipped with Razer’s brightest display yet. While indoors, we hardly had to bump up the backlight past 30%. Even at 50% screen brightness, this 17-inch screen easily overpowered any bright winter sunlight coming through our office windows.

For a laptop, the Razer Blade Pro sounds surprisingly good, too. The 17-inch gaming laptop comes with dual-firing, 2-watt speakers enhanced with a larger speaker box and added pre-amp. Additionally, on both sides of the notebook, you’ll also find a pair of smaller side speakers to help add an extra layer of surround sound. Any way you slice it, though, if you want an 17-inch gaming laptop with the latest and greatest Nvidia Pascal graphics, expect a bill of at least $3,000 (about £2,420, AU$4,140). Getting desktop equivalent graphics on notebooks has been a long and hard fight, but that victory has come with higher price tags on almost all gaming laptops.

Last year, the most expensive desktop replacement you could find was the $3,305 (about £2670, AU$4,560) Origin EON17-SLX. At the time, it set a high bar due to its Intel Core i7 desktop processor that was never meant to go in a laptop and the newly minted Nvidia GTX 980 (minus the “M”) for notebooks. These days, powerful mobile gaming rigs for more than $3K are the growing norm.

Here’s how the Razer Blade Pro performed in our suite of benchmark tests:

The Razer Blade Pro is one of the thinnest and speediest 17-inch laptops we’ve tested. It’s a performance machine that easily cut through any task we asked it to complete, whether it was enjoying the Winter Wonderland in Overwatch or editing 360-degree footage we recorded with a Nikon KeyMission 360 camera.

Unfortunately, on the benchmark front, this isn’t the best performing machine in the world. Compared to the MSI GT73VR, the Blade Pro put up consistently 100 to 200-point lower 3DMark scores. GeekBench also shows the processor is running behind by as much as 500 points.

Ultimately, though, these are small discrepancies we can attribute to the MSI GT73VR’s higher clocked processor. When it comes to actual gaming, the Razer Blade Pro delivers silky smooth 1080p Ultra gaming with our benchmark games as well as a few of our favorites, like Battlefield 1 and Watch Dogs 2.

At 4K Ultra, however, our benchmark games hit an upper limit of 28 frames per second (fps), which is still a playable experience if not as ideal as 60fps. We were only able to reach the Ultra HD promised land through Overwatch and other less graphically demanding games. For now, with just a single Nvidia GTX 1080, it seems we still can’t play the latest games at a super smooth frame rate with Ultra settings at 4K.

The 17-inch Pro sports a 99WHr rechargeable lithium-ion polymer battery – the largest legally allowed on an airplane – but even that isn’t enough to keep this machine running for long. Despite the big tank inside this rig, it only lasted for 3 hours and 20 minutes with light usage, including writing this review and browsing the web while at 30% screen brightness.

Reducing the screen brightness to its minimum level and turning off the keyboard lighting effects can help you get to four hours of juice, but you’re not likely to get much more out of this machine.

In our standard move test, the Blade Pro narrowly missed playing our copy Guardians of the Galaxy twice in the span of 3 hours and 52 minutes. Still, that’s double the battery life of other big rigs, like the MSI GT73VR (2 hours and 15 minutes) and Origin EON17-X (1 hour and 54 minutes).

Overall, battery life is better than we expected, considering the energy draw of this laptop’s high-powered components and 17-inch 4K screen topped off by Razer’s thin design. Still, if you’re looking for a gaming laptop that lasts for at least five hours away from the plug, it’s going to have to be the 14-inch Razer Blade or another 15-inch machine, like the Asus ROG Strix GL502.

The Blade Pro is Razer’s most powerful and ambitious laptop yet. It offers just as much power as other 17-inch desktop replacements, but does so with a thinner frame and longer battery life.

What’s more, Razer has integrated one of the most attractive displays and tactile keyboards ever seen on any laptop. Although it takes some getting used to, we love having the trackpad sit right next to the keyboard.

Although the Razer Blade Pro runs for longer than most 17-inch desktop replacements, four hours of battery life still isn’t enough to get much done. What’s more, the price will dissuade even more users from choosing Razer’s 17-incher over the Aorus 17 DT and Alienware 17, both of which offer the stronger hardware for less.

The Razer Blade Pro is arguably the ultimate desktop replacement that you can carry around. The thinner frame, lighter weight, smaller power supply and longer battery life, all help make this 17-inch machine something we would actually consider to be portable.

From both a power and comfort perspective, we also felt right at home bringing this laptop anywhere and getting a desktop-like gaming experience.

The 17-inch IGZO display is both roomy and vibrant for any production work we need. Meanwhile, Razer’s mechanical keyboard finally affords us with the clicky-typing experience we’ve been craving on a laptop since forever. Even the starboard-side touchpad, though odd at first, gives us a familiar feeling of working and gaming on a traditional desktop.

Priced at $3,699 or £3,499 (about AU$5,070) to start, the Razer Blade Pro is no small investment. However, even with more affordable and better-equipped options out there, we would personally pick Razer’s 17-inch machine for its enhanced portability.

If build quality, a gorgeous display, an incredible keyboard and portability are all determining factors for your next (figuratively and literally) big gaming notebook purchase, the Razer Blade Pro is well worth the expense.

‘The world’s first performance enhancing gaming glove’ sounds silly, but it might actually come in handy