How To Get Yourself A Shiny Venusaur

Pokémon GO Community Day is upon us once again for the third time, this time landing on a Sunday instead of a Saturday, as Niantic may be testing interesting in an alternate weekend day. As a reminder, the event will run from 2PM to 5PM EST (11AM to 2PM PST), as Niantic hasn’t stretched the window any further this time.

So far, Pokémon GO is only including Gen 1 Pokémon as its “special” offering during Community Day. Everyone was extremely excited last month when Dratini’s arrival meant they could hunt for high IV and/or shiny versions to turn into powerful and/or shiny Dragonites.

This month, Niantic’s pick is Bulbasaur. He’ll know a special move, Frenzy Plant, which is a powerful, high-damage, two bar charge move meaning it’s actually useful. There are currently mixed reports of Venusaur retaining and not retaining Frenzy Plant after evolution. If yours does not have it, try restarting the app. It does seem like most will be able to learn it, though make sure you’re evolving during the event time window to be safe.

But more importantly than the special move, fans are looking to catch a shiny Bulbasaur which they can then turn into a shiny Venusaur, a true rarity, as this will be the first time that’s possible in Pokémon GO. Community Day has brought shiny versions of all its Pokémon so far, and with new shiny Bulbasaur family assets added to the game, it seems that’s going to definitely happen again.

So, how to get one? It’s a numbers game.

On a normal day, the chances to get any existing shiny in Pokémon GO is about 1 in 230-260, based on past data for Pokémon like Magikarp or Sableye. But for Community Day? It’s much, much higher. There’s some measure of debate around the exact number, but it’s close to about a 3-5% shiny spawn rate. For the first one, Pikachu, it was about a 1 in 22.7 chance to catch a shiny. For Dratini, it was somewhat similar, though perhaps a tiny bit tougher to find. 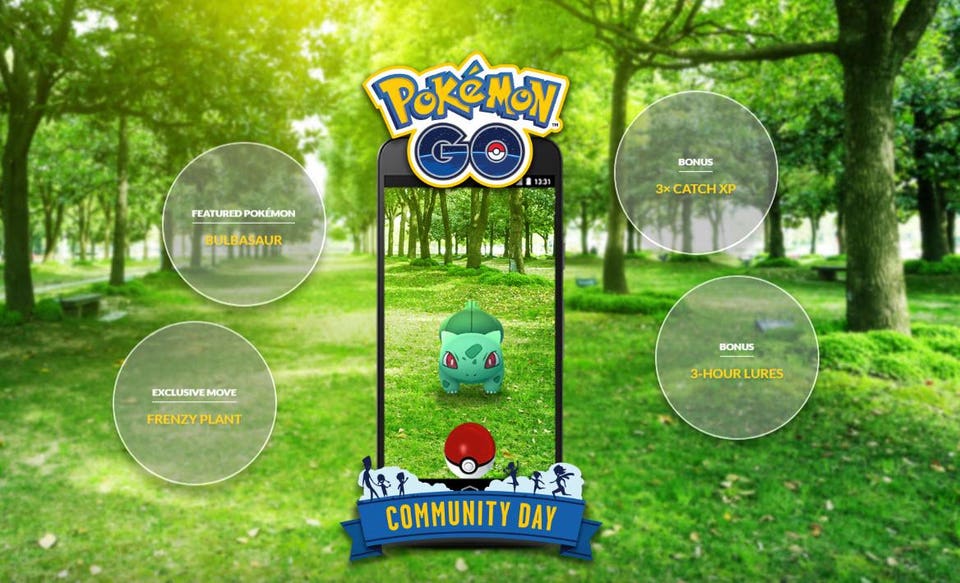 If you have anything resembling average luck, I’d say that if you catch between 20-35 or so Bulbasaur today, you’re likely to end up with a shiny. With that said, luck is luck, and I did hear reports of people catching a hundred Dratini last time without a shiny, so that can happen.

Unlike Dratini which was neon pink when you caught it, shiny Bulbasaur is just a shifted shade of green, a bit less leafy and a bit more glowing. It’s when it evolves into Ivysaur and Bulbasaur that you can really see the difference, a yellow-orange flower instead of the usual red one.

Then, to evolve that shiny Bulbasaur into shiny Venusaur, you’ll need 125 candies. If you’re starting from zero (which I doubt), that’s about 40 catches without candy-boosting Pinap berries, 20 or so with them. And as ever, once you do go to evolve, if you have more than one shiny, make sure you’re doing it for your highest IV version.

I am hoping that my Venusaur will be able to keep Frenzy Plant as a move, but that remains unclear, and I’ll have to cross my fingers when evolving. Today, prepare to catch yourself a lot of Bulbasaur in three hours to find high IVs/shinies. You might get lucky and find one right away, but judging by some very angry people last event, it’s all a matter of good fortune. At the very least, take advantage of the catch XP bonus, and set up some three hour lures to ensure even more Bulbasaur come your way.

As ever, I remain pleased with Pokémon GO Community Days. They’re incredibly fun events that get people outside playing together again like the good old days, and they remain consistently impressive. Bulbasaur may not be the most exciting pick, but I’ll be damned if I’m going to end today without my own shiny Venusaur. Best of luck, and check back here for updates as the event kicks off.

OnePlus 6 specs, release date, news and rumours: What we want to see from the next flagship killer

Secret Facebook features: 17 tips and tricks to protect and get more out of the social network