The Just Cause series has a knack for holding your attention in short bursts. It can cause you to grit your teeth as you wingsuit so close to mountains that you can taste the snow-spray, and grapple-hook up to helicopters to escape the mushrooming flames of exploding bases. It also gives you the freedom to tether a goat to a balloon, hook yourself onto it, and float off into the stratosphere.

The thing is, while there are a few new twists in Just Cause 4, it’s by and large the same old shtick, which is more evident than ever this time round. Just Cause has never really known what to do with itself when the adrenaline dies down and you have a moment to catch your breath. Its map-painting missions are protracted, its basic systems are creaky, and some of its design changes are ill-advised.

And yet, thanks to some sparing improvements—mostly in the way of chaos-causing gizmos—Just Cause 4 is still capable of charming me. For all its annoyances, it still says to me, with a mischievous twinkle in its eye, ‘Yeah, but do other games let you do this high calibre of silly shit?’ Which of course they don’t, unless you count previous games in the series. 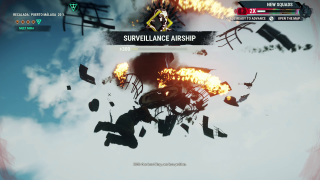 You are again Rico Rodriguez, a freelance super-agent, and one-man flashpoint for revolutions on seemingly every dictator-run tropical island he drops into. This time, Rico’s helping liberate the South American island of Solis, a vast paradise of several beautiful biomes whose people are oppressed by dictator Oscar Espinosa and his Black Hand army. It ties into the plots of the previous games (for anyone that actually cares), and has a dash of light intrigue too thanks to a connection with Rico’s father, who inadvertently helped the dictator harness the elements and weaponise the weather. It’s lightweight, but good-humoured and well-written enough to tick along with.

It’s on you to wrest back control of the island. Where in previous games you did this simply by causing enough destruction in a given region, this time Avalanche has attempted to inject a bit more depth into the process. Each region has a specific mission you must complete, and once you’ve done that you can call in squads of revolutionaries—unlocked by destroying enemy infrastructure and capturing certain regions—to take control of it. The whole map is open for you to explore from the start, but you can only move these squads into regions neighbouring those under your control, making that map-painting process a little more focused than before. 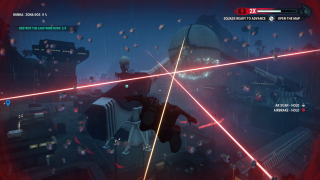 This macro-scale layer gives an appearance of strategy, with the numbers of squads in regions and frontline markers teasing the possibility of a kind of Risk-like territory game, but it never follows through with it. Head over to the frontlines and you’ll sees skirmishes between your squads and the enemy, but it’s all for show, as the enemy can’t actually retake territory from you, and your side’s progress is dictated solely by Rico’s renegade activities.

And it’s of course these activities, not the pseudo-strategy twaddle, that are the real reason people play Just Cause. The series knows now that it’s dependant on the kind of all-action spectacle that makes Mission Impossible look like the most stolid of John le Carre novels.

So it’s expanded the player’s arsenal with everything from drone-firing railguns to weather-harnessing super-weapons, which include a wind cannon that lets you invisibly blow away whole squads of enemies and structures, and the lightning gun, which not only zaps enemies but can create mini lightning storms that fry everything in its perimeter. You can also now call in several planes simultaneously to drop a vast array of weapons and heavy artillery, giving you the freedom to turn Just Cause 4 into a vibrant warzone of ragdolls and explosions whenever you like. 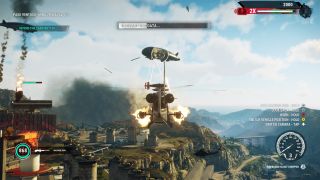 Then there’s the all-important tether: the tool that single-clawedly set the series on its path of physics-based excess. This lets you attach objects and people to each other for all kinds of showcases of physics silliness, and it’s received a welcome upgrade. There’s still the retractor which lets you, say, string two or more helicopters together and send them twirling into each other. Joining it now is the ‘Air Lifter’ balloon tether, which lets you attach several balloons to objects and send them off to orbit, as well as ‘booster’ tethers, which send their hapless targets fizzing around uncontrollably like cheap fireworks from your local convenience store.

The old upgrade system has been largely replaced, with many once-unlockable abilities now available from the off, and a new mix-and-match tether loadout system. Here you can have three different tether loadouts, with each one containing whatever mix of balloon, rocket and retracting tethers you like.

It’s a good call, going all-in on the sandboxy spirit of the series even though none of this stuff is necessarily practical in a combat sense. You can unlock fine-tune features like making your tether balloons explode on a trigger, or add a ‘Power Yank’ to your retractor, which makes even heavy vehicles collide together like toys in the hands of a sugar-crazed child. It offers new levels of playful possibility that I’m sure people far more patient and creative than myself will exploit to make for some incredible YouTube highlight reels. Just Cause 4 is designed around these possibilities, though that comes at the expense of a well-paced wider game.

Rico remains a weightless spiderman, retaining that joyous, nonsensical means of getting around that relies on well-timed sequences of grapple-hooking, parachuting and wingsuiting. It still feels breezy and liberating, though the novelty has faded for lack of any major improvements in this area.

On the ground, though, Rico remains stiff in the joints, with no ability to sprint, dodge, or perform melee attacks with any real menace. Guns lack weight and punchy sound effects, enemies are incorporeal and floaty as if half their insides have been replaced with helium, and driving remains awkward. Even Rico’s animations and the floppy ragdoll animations look as janky and unrefined as they always were, which is less palatable in 2018 than the last game in 2015, or Just Cause 2 in 2010. 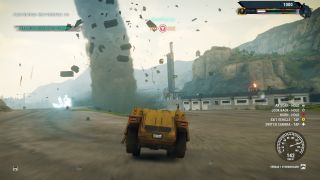 Progression is achieved mainly through territory-taking missions, which is unfortunately the weakest, most protracted part of the game. It’s a small carousel of objectives that vary between seeking out consoles (so many consoles), standoffs against mindless waves of enemies while someone ‘hacks a terminal’, ‘overloads a core’ or other cyber-clichés, and having to search large sections of base for barely discernible structures like generators and fuse boxes, which open up drab underground bunkers.

The idea was presumably to give these missions more of a ‘Special Operations’ feel than the simple destructathon of before, but they mess up the pacing, especially as Just Cause 4’s mechanics are unwieldy for smaller spaces and fiddly activities. It creates too many tedious comedowns from the bursts of action that the game thrives in.

The story missions are more carefully constructed, with some excellent set pieces where you’re chasing tornadoes, or dashing through deserts in the midst of a sandstorm. But even then things can get the wrong kind of chaotic, such as during one chase sequence where enemy cars and choppers were spawning and literally piling over each other to get to me so quickly that it took me about five minutes to find an opening to get into a vehicle. It’s as if Avalanche sometimes just cranks up the chaos slider (which I totally envision as one of the studio’s design tools) without much design or thought behind it. 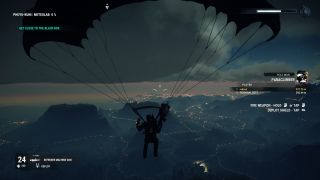 The amount of destructible structures—one of the very selling points of the series—seems to have been cut down from previous games. The generic bases that many missions take place in are populated mainly by concrete buildings, with fewer of those brittle metal frameworks that so splendidly collapse like matchstick houses. This is accompanied by the other strange decision to get rid of throwable C4, replacing it with the rather rare mine launcher. Where before controlled explosions were always an option thanks to a healthy supply of C4, here they’re more of a luxury, which seems like an unnecessary thing to reel in.

Not that Just Cause 4 is lacking in explosiveness, and when the fuel tankers careen across the ground or vehicles explode in seemingly endless chains, it still stokes up a familiar feeling of awe. It’s possible that the introduction of new weather events like sandstorms, lightning storms and tornadoes was intended to shift the focus away from just smashing stuff up (which did eventually get tedious in previous outings). It’s a reasonable trade-off, even if the extreme weather is too infrequent to shape the game as much they were vaunted to.

Just Cause 4 ups the excess just enough to get away with the fact that its groaning framework feels about one firm tether yank away from collapsing. It still delivers the kinds of uniquely gamey thrills that seem to have been serendipitously borne of gravity-defying glitches, but when the smoke clears and you regain your senses, the underlying shonkiness of the missions and basic ways you interact with the game is laid bare.

With so much adventure-holiday-with-guns fun to be had here, it’s frustrating that Avalanche is content to just gloss over existing issues rather than fix them (couldn’t the studio even have looked at its own Mad Max game for ways to improve the vehicle mechanics and melee combat?). Just Cause 4 still taps into that need for reckless abandon that resides in all gamers, but its impact is softening. I have a good several hours of tethering tomfoolery left in me, but once I put it down, I can’t see myself returning to this series until it gets the refurbishment it deserves.

GTA Online’s promises of GTA 6 next year are a hoax, Rockstar confirms