Whenever the Cyberpunk 2077 release date rolls around, it’s going to keep you busy for a while. Developer CD Projekt Red has indicated that Cyberpunk 2077 will have about as many quests as The Witcher 3, which is quite a lot, and you’ll have all of Night City to explore – much more than we saw in those 48 minutes of gameplay. Still, we couldn’t help but go on a deep dive to find all the details we could. We don’t have to wait for another info dump from CDPR to find out more – let’s see what else is out there right now. 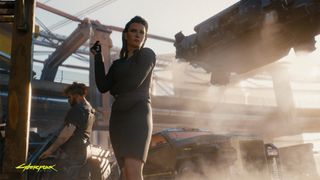 The Cyberpunk 2077 release date has never been officially set, but that didn’t keep us from doing some of our own calculations. The creator of the original Cyberpunk tabletop role-playing game gave some more context for where the game is in a recent interview: “We have an awful lot of stuff that we want to do, and it’s going to take time to do it. And I’m hoping the fans are going to give us the time to do it,” Mike Pondsmith said. “We need space, we need time, and we need the privacy to mull it over.” And that really doesn’t sound like “surprise holiday release window” material, unfortunately.

If you were expecting a sci-fi flavored version of The Witcher, you may be reeling right now. But don’t worry: in this case, change is a very good thing. Cyberpunk 2077 uses a first-person perspective to put players firmly in the boots of a low-level gun-for-hire on the futuristic streets of Night City, and it also works well with the game’s penchant for fast-paced gunplay. That said, 2077 is far from a straight first-person shooter: dialogue bleeds seamlessly into exploration, hacking and engineering skills can get you all kinds of places you’re not supposed to be, and there are even a bunch of non-lethal (or just non-gun) options for fighting. Plus, there is still a bit of third-person during scripted cut scenes and driving around the city. Keep in mind that everything we’ve seen so far is subject to change, but it’s all very promising. 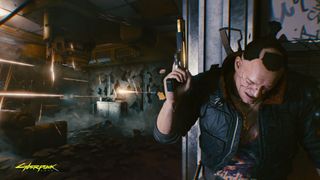 CD Projekt Red used Gamescom as an opportunity to share a new set of screenshots with the world. Click that link to see the whole set, but in short, they were much more focused on characters and tense moments than the largely scene-setting images released around E3. They offered a new look at main character V’s comrade in arms, Jackie Welles, who unwinds after a long day of futuristic gunfights with some relaxing acupuncture.

The second trailer for Cyberpunk 2077 is a stark contrast to the original: it was made inside the game engine and shows scenes from all across Night City, as opposed to the first trailer which was built with CGI and took place almost entirely in one super-slow-motion moment. We see various scenes of life, spanning from a subway car to a city street to inside a corporate office, and a narrator tells us about how things kinda suck around here but people keep crowding in anyway. Turns out the narrator is our main character V, or one possible version, and things quickly escalate with scenes of big guns, aerial shootouts, and car chases. And we’re officially excited. 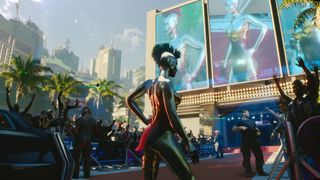 The E3 demo of Cyberpunk 2077 looked really good in cramped hallways and more open areas alike. You might worry about that kind of heavily choreographed demo also running on the equivalent of a NASA supercomputer, but it turns out the PC specs were pretty reasonable – at least as far as fairly high-end gaming builds go.

We did some comparison shopping to put together a current PC build with those components and came to a price just north of $2,500. That’s a lot, but keep in mind two things: 1) PC component prices drop over time as more powerful successors emerge, and 2) that was likely a very high-resolution, demanding, and most of all unoptizimed version of the game. There’s a good chance that Cyberpunk 2077’s minimum and even recommended PC specs will be lower than the E3 demo machine. 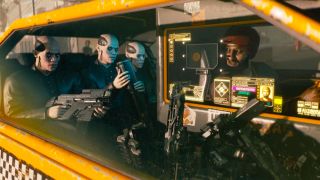 I said “one possible version” before because you’ll be able to create your own character as soon as you start playing Cyberpunk 2077. You’ll be able to customize V’s face and body in the usual cosmetic ways, but you’ll also be able to make some choices that influence the story as well: your character’s gender will change things a bit, moreso the background you pick for them. And there are no pre-defined classes, but you will be able to allocate your skills and abilities as you prefer. You can continue to refine and customize your character in the game proper by installing Cyberware to do all kinds of things; a few examples include augmentations that boost your reflexes or give you better tactical awareness in combat. 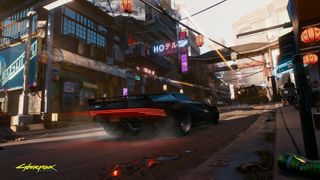 There’s no other place like Night City. Located about halfway between Los Angeles and San Francisco (where the city of Morro Bay is in real life), its six districts span the socioeconomic spectrum from opulence to abject poverty. At the shining top is City Center, where the biggest corporations compete to make the most showy headquarters possible. At the grimy bottom is Pacifica, a distant part of the city that has been partially abandoned and overrun by gangs. In between are the industrial district of Santo Domingo, the tourist-friendly Westbrook, the affluent suburbs of Heywood, and the dense tangle of life and commerce that is Watson. Each zone will span a decent chunk of horizontal real estate, but CDPR says vertical exploration will be just as important. You’ll need to go floor-by-floor if you want to discover every corner of Cyberpunk 2077’s world.

All the upcoming DC Extended Universe movies on the way