Yesterday, Treyarch released a trailer for its upcoming Call of Duty: Black Ops 4 beta, but let’s be honest, that’s not what you’re here for. While the new footage of the closed multiplayer preview looks stellar, the trailer also featured a teaser for Blackout, Black Ops 4’s upcoming battle royale mode, which will have its own beta on PC, PS4, and Xbox One this September.

It appears right at the end of the multiplayer beta trailer, and is only a couple of seconds long, but features direct gameplay sizzle reels, packed with secrets and nice surprises for Call of Duty fans to pore over in detail. The teaser flashes by so fast, in fact that you may well not have caught all the cool stuff that it shows off. Here’s the important stuff you may have missed.

Classic Call of Duty maps are here, including Nuketown 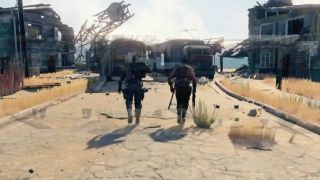 In a series of blink and you’ll miss it moments, key locations from Call of Duty’s multiplayer past show up, including everybody’s favourite chaos pit; Nuketown. The map has showed up in almost every Call of Duty game since first appearing in the original Black Ops, and will apparently be just one part of Blackouts single, large map, alongside Cargo, Raid, and a host of other unidentifiable locations seen briefly within this trailer. 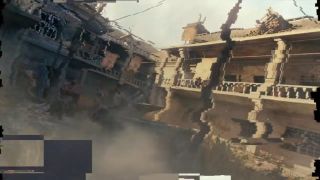 Recognise the location above? That’s because it’s Verruckt, a classic map from Call of Duty’s popular Nazi Zombies horde mode, which originally showed up in World at War all the way back in 2008. This suggests that even maps outside of Call of Duty’s PvP content will be part of Blackout’s setting, and the fact that you can see the zombies themselves at one point in the trailer implies they could be another threat to contend with in battle royale.

Wingsuits are definitely *a thing* 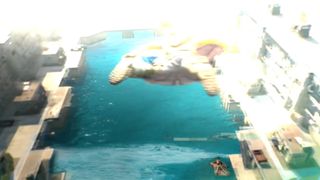 It’s hard to make out, but the above image does indeed confirm that Treyarch is taking a Just Cause approach to traversal in Blackout, showing two soldiers hovering across a swimming pool in wingsuits. Its unclear whether these gliding costumes will be available from the get go but I, for one, can’t wait to drop on unsuspecting foes from above, Far Cry style.

Your favourite Call of Duty characters are here (Hi Frank!) 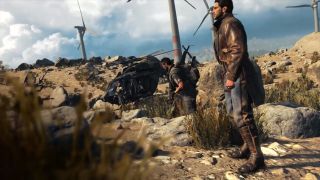 Is it me, or does that guy in the background look suspiciously like American badass Frank Woods, of Black Ops and Black Ops 2 fame? We knew that Blackout would let you play as classic characters from the annuls of Call of Duty campaigns past, but this teaser finally gives us a better look at how that works. You can even see someone playing as Bruno Delacroix, a new character from Black Ops 4’s Nazi Zombies campaign. He’s the guy holding the massive sniper rifle. 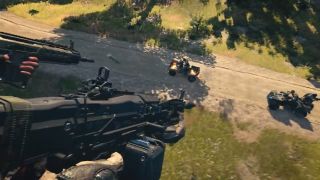 The biggest focus of the Blackout teaser is this scene, here, in which two teams duke it out across a wooded plain. One squad is raining down shrapnel from the comfort of a helicopter, while the other tries to speed away on two-man quad bikes. Thanks to a well timed RPG, the quad bike team wins, proving that air vehicles won’t necessarily be a sure fire way to victory in Call of Duty’s take on battle royale. That’s definitely a good thing for acrophobes like me.

Can we achieve lagom with the Volvo XC40?

Fortnite’s Infinity Blade has been Vaulted