Apple unleashes its most powerful desktop ever

An amazing machine, but for a very specific (or spendy) kind of person. 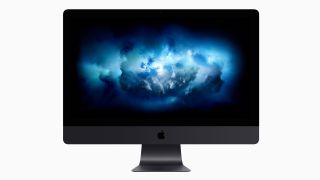 The iMac Pro is a wolf in sheep’s clothing. Actually, that’s underselling it. It’s a small nuclear warhead in sheep’s clothing. Somehow, Apple has packed a workstation with up to an 18-core Intel processor in a frame the exact size of the regular 5K iMac. The only thing more incredible than the engineering feat of producing it is the price you might pay for one. But this a truly pro machine, and that kind of power comes at a cost.

If you’re wondering what the benefits are of spending that kind of money on a supercomputer that fits behind a monitor, you can probably already rule out the iMac Pro as being for you, even if you could afford it.

To make it worthwhile, you probably have to be someone who looks at the price of the iMac Pro, calculates how much time it could save them, and then works out whether the two balance out.

Or a millionaire who just really wants the (admittedly irresistible) Space Gray finish for their desktop computer. And no one on BigBagBlog would blame you for that. Just look at it!

But the gist is, the reason this costs so much is that it’s using workstation parts like ECC (error correction code) RAM, which means your huge, vitally important work is less likely to become corrupted and crash apps out, losing you time and money. If you don’t need that, you can go cheaper. 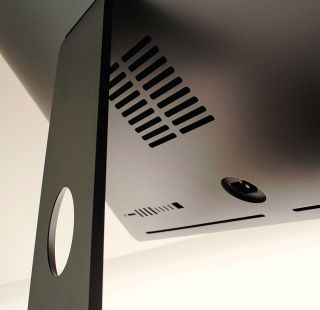 Okay, we’re finished being boring and sensible now. You want to know what it’s like anyway. We feel you.

Obviously, it’s fast. Really fast. Everything you do is effectively instant, though that’s mostly down to the storage. Apple’s SSDs use some kind of mysterious technology to be just comically fast, even compared to what else is out there. We clocked the storage on the iMac Pro with write speeds of 3GB/s per second, and read speeds of 2.5GB/s. Just to be clear, that’s three gigabytes per second. This is part of what makes it so good for video work (see the box on the next page for our tame video pro’s opinion of what it’s like to actually use for 4K editing).

But other Macs also have really fast storage (not quite this fast, but we’ve seen the MacBook Pros hitting 1.7GB/s), which makes them pretty much as fast for loading apps and stuff. The speed of the iMac Pro only really stands out from other Macs once you start doing something processor or graphics intensive.

So naturally, the next thing we tried was a bit of video exporting. We like to tax things with a video export of a native Blu-ray file into a streaming-friendly MP4. The most recent regular 5K iMac managed to convert our 31-minute video in 27 minutes. It’s a tough challenge, and this is a respectable score. The iMac Pro managed it in under 10 minutes. 9 minutes 40 seconds, to be precise. That’s what we mean about the price being worthwhile if it saves you time – it’s a huge speed boost.

It’s a similar story when it comes to graphics. The Vega 64 chip we have is AMD’s big powerhouse, meant to battle the top-end cards from rival Nvidia, and there’s big performance here. In Unigene Heaven benchmarks, it doubles the score of the 5K iMac, which is a good start.

But that’s just theory. The more important fact is that, if you want to play games in 4K or even 5K, you can. Not always super smoothly, but games a few years old, like the Tomb Raider reboot, can hit 30fps in 5K and and 60fps in 4K at higher quality settings. With more modern stuff , stick to 2560×1440.

It’s also powerful enough for VR, which Apple’s keen to push, though it’s still only just getting started on Macs, really. Of course, Macs still have generally worse gaming performance than Windows, and you can buy this level of GPU power for a fraction of the price in a PC, so think of gaming as a bonus here only. 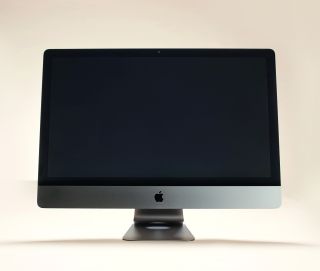 One thing softens the price of the iMac Pro, at least, is that it’s basically a workstation with a free 5K screen. A standalone 5120×2880 27-inch display that connects over a single Thunderbolt 3 cable will set you back £1,400, so getting it as part of the package here definitely adds appeal.

That said, it is the same panel you get in the regular 27-inch non-Pro iMac, so if that’s the bit that interests you, you don’t need to stump up £5k+ for your 5K screen.

Still, the important thing is that the screen is totally gorgeous. It’s bright, colours are fantastically vibrant, and naturally everything looks super-sharp. For photography and 4K video playback, it’s pretty much best in class, though we know some people don’t like the glossy glass-coated finish.

It does have one downside, though, which is that it’s not rated for HDR at all – having a built-in way to check your HDR grading would’ve been a boon for video editing. The 500-nit brightness (comparable to some monitors that say they are HDR-capable) is a start, but is way below the 1,000 nits expected for true HDR LCD TVs. It’s also not a native 10-bit display, which is what HDR requires, instead using techniques to mimic 10-bit colour on an 8-bit display. The difference is small and the complaint niche, but ‘small’ and ‘niche’ are the main words we’d use to describe this machine’s intended audience, so it’s worth noting. 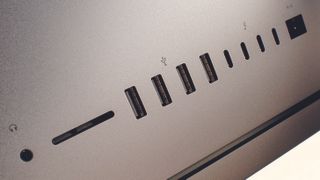 Round the back of the screen, it’s nice to note that Apple has avoided cutting back on the connections the way it did on the MacBook Pros. Four regular USB 3 ports make it easy to hook up anything you want, and some good old-fashioned slots for SDXC cards, 3.5mm headphones and the humble Ethernet cable (though at a not-so-humble high-speed 10Gbps connection speed) mean you plug in pretty much anything you need to. The new hotness comes in the form of the four Thunderbolt 3 ports (which double as USB-C ports, since they’re the same connector). Again, the need for Thunderbolt 3 is niche, but if you’ve got a ton of 4K videos to import, the 40Gbps transfer speeed will be heaven.

They do inherit the problem the ports on the regular iMacs have, though, which is that they’re a pain in the arse to get to. You think it’s hard to get a USB plug in the right way up first time normally – try doing it by feel reaching around the back of this beast. Maybe you’ll want to add to the Pro’s price a few hundred quid for a Thunderbolt 3 multi-port dock you can keep closer to hand.

The iMac Pro comes with an Apple keyboard and mouse (or trackpad, which is our choice – the Magic Mouse is not great) finished in super-cool Space Gray to match its overall aesthetic, naturally. Apple’s keyboards are still a point of contention – the low-travel, clicky feel is hated by some, but we don’t mind it, after a small adjustment period. The keyboard is nicely flat for good ergonomics, though, and is full-size, so includes a number pad. 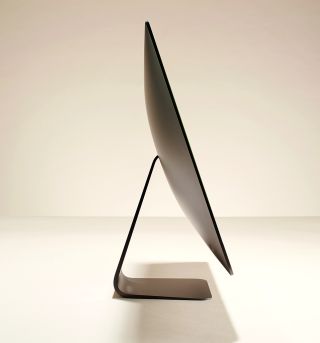 Would we recommend the iMac Pro, then? Absolutely, though if you’re asking us and not some kind of specialist community on the internet, you may not be the intended buyer. If you want to know whether it’s a stunningly powerful miracle of design, though, it’s a firm yes. 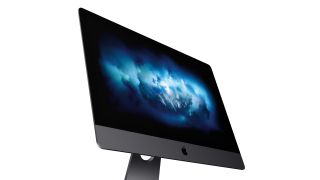 To find out what the Pro’s intended audience thinks of it for real pro work, we handed it over to Alun Pughe, Commercial Film & Video Director for BigBagBlog’s parent company, Future.

I’ve used a lot of different machines for high-end video editing, and I’ve never really cared which brand logo they have stencilled onto their chassis as long as they do the job. And I ask a lot from them. Now that 4K video is the norm in my sector of the industry, this has really put the cat among the pigeons when it comes to performance – doing anything in real-time with a timeline full of Ultra HD clips tends to bring a lot machines to their knees. When the iMac Pro came in I was thrilled to get the chance to see how it coped…

Let’s get this out of the way quickly: the iMac Pro is gorgeous. I’ve always been a fan of the iMac’s aesthetics but this is something special. The ‘Space Gray’ finish is flawless and the 5K, 27-inch Retina screen is breathtaking. The review model came with the lovely Magic Trackpad 2, which I found charming and very practical, and the Magic Mouse 2 which, possibly due to my large hands, I didn’t like so much. Both were fine and precise enough for video editing, though.

RED eye For my work during the time I had the iMac Pro, I was using Adobe CC Premiere Pro, and collated RED Raw footage, Canon C200 CinemaRawLite and some lower tier Sony FS7 XAVC clips to see how the iMac performed.

Watching 4K footage back on the iMac’s screen was a joy. The colour space and contrast showcases your footage beautifully, but I soon found myself wishing I had more than 27 inches of screen to monitor the clips and still have space for scrubbing through the timeline or utilising other windows. The iMac does have multiple Thunderbolt 3 ports, so additional monitors would be sensible if you were purchasing for professional video editing.

Thunderbolt 3 has enough bandwidth for 5K external monitors, and the iMac Pro can support two 5K displays on top of its own (or four 4K external 4K displays), so you get as much as space as you need.

Ingesting footage was instantaneous and as I placed the various 4K clips into the timeline, I was immediately impressed that there were no dropped frames whatsoever in playback. Adding multiple LUTs onto the clips for live colour grading during playback and making amends to their settings didn’t affect the experience either (even when playing in full screen). At one point, I had more than four layers of effects on a clip before playback started missing frames, and even warp stabilisation (a resource-intensive tool for reducing motion in videos) took moments and not the usual minutes to prepare.

The iMac did begin to struggle with 8K RED footage, and when eff ects were added a preview render was needed – but this was to be expected. 8K is really hardcore.

Exporting was also really impressive. I queued up a web-friendly one-minute H.264 video made up of random 4K clips to export at a 4096×2160, two-pass target of 25Mbps, and it was rendered within three minutes. That’s as much as five times faster than my usual (pretty damn beastly) machine. The process was surprisingly quiet and, though cooling fans weren’t heard, the iMac didn’t become noticeably warmer. Absolutely amazing.

So is the iMac Pro a must-buy for high-end professional video editors? It’s certainly an amazing machine that does everything you’d hope it would and it does them very well. However the cost is undeniably high and its limited upgradeability is a shame for future-proofing. It really was a delight to work on, though.

Google is reportedly making a games console for the future, but can it compete with PlayStation and Xbox?