It’s been a long time since I’ve played a game that’s truly cooperative. Yes, there’s been stuff like the brilliantly hectic Overcooked, the zany Snipperclips or big AAA co-op experiences in Destiny 2 or Monster Hunter World but, technically, playing together with your friends in any of those games is optional. That’s definitely not the case with A Way Out though. This new indie title from Hazelight, and the second EA Original title (the first was Fe, which came out earlier this year), is built entirely for co-op – to the point that you can’t actually play it unless you rope in a friend, either for some local or online multiplayer action.

Now, that might sound like quite an issue for A Way Out, as not everyone likes having to play with another person, but it’s a neat touch that you only have to own one copy of the game to play. It also helps that every single design decision Hazelight has made with A Way Out puts co-op as the central focus. Never before have I played a game that makes you and your friend feel like an unbreakable team, with the game’s story failing to progress unless you’re in constant communication with your partner.

Two heads are better than one

You play as a pair of prisoners who are looking to break out of prison and earn their freedom. Leo’s in for armed robbery, assault and grand theft, whereas Vincent is serving time for fraud, embezzlement, oh and a little bit of murder. Why Hazelight chose to make two characters both white, brown-haired males is a little confusing though. It can occasionally get a little confusing as to who’s who. Obviously Leo’s rather large nose and sideburns are supposed to differentiate him from the bearded Vincent, but it feels like there could have been a little more creativity in the character design, even if you only look at hair colour alone. 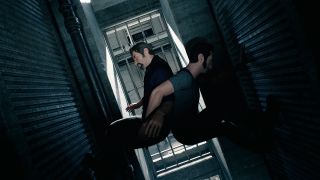 But that doesn’t detract from the fact that the team at Hazelight – headed by Josef Fares, of Brothers: A Tale of Two Sons fame – have created a story that builds one of the best shared experiences gaming has ever provided. This isn’t a game built for two players, it’s built for two players sharing one narrative experience, one story, one goal. And that’s only created when the two characters work together. Every waypoint, every checkpoint, every little sidegame feels complete because you’re doing it together. Whether it’s splashing the water to usher fish to each other; going back to back to shimmy up a wall gap; passing a chisel between cells to find an exit route; or even just playing Connect Four or a game of basketball, the co-op never feels like an added extra, it’s all built for you to enjoy together in a way that’s satisfying and worthwhile regardless of the scale of the interaction. 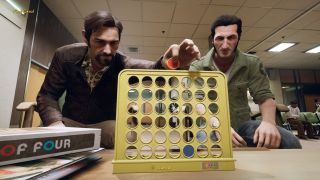 But of course, because you’re playing as two humans, there are times when working together can be a little more troublesome. There are moments in the game where you have to choose an approach to a certain situation. Vincent tends to take the calmer, more rational tack, while Leo is much more of a fan of violence, noise and the more direct approach. When you’re close to being recognised in the hospital for example, Leo wants to knock the guy unconscious and stash him somewhere, while Vincent wants to try and talk his way out. They’re both valid options, but you and your real-life partner in crime must agree on the approach to take before the story moves on. Any quibbles on tactics must be sorted out in real life, because the game only works if you’re ready to be a team.

Innovations in cinematics as well as co-op gameplay 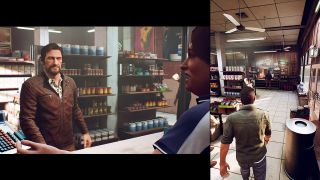 There are rare moments when your characters aren’t both on screen at the same time, but Hazelight has thought of ways to make this visually interesting too. As you move from one character to another, the cinematics shift, flying through air vents, corridors and windows to make sure that you’re constantly engaged, regardless of whether you’re playing or not. One moment you’re watching Leo smash cops’ faces in with a lamp, the next you’re watching Vincent’s rear disappear down an air vent and emerge out the other side to find even more cops. That’s true of the split screen view too though, with windows changing and rotating depending on the focus points or particular scene you’re in. For an action sequence, for example, the character windows are horizontally stacked, while elsewhere the vertical boxes shift to give one character or another the biggest box, depending on the current focus. 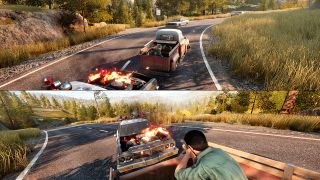 That’s just a small example of the attention to detail poured into A Way Out’s storytelling. Although that’s the main driving force in the game, it’s also commendable just how varied the gameplay is too. Throughout the game’s roughly ten hour play time, you’ll experience everything from sobering narrative sequences to car chases, and there were times when I had to remind myself this wasn’t an Uncharted spin-off with more adventures of Sam and Nathan Drake, such is the quality and blend of A Way Out’s action, story and puzzle solving elements. Pacing is spot on too, so you never get bored by overly long cutscenes or extended action sequences.

In fact, aside from the similar character design, the only thing that slightly – and I mean slightly – irked be about A Way Out was that the opening was a little QTE (quick time event) heavy. But I think the only genuine problem A Way Out has is getting people playing. Co-op can put a lot of players off, but not experiencing A Way Out is denying yourself of one of gaming’s greatest adventures to date.

Thanos is coming to Fortnite in a limited-time Avengers: Infinity War event