The myth of the old west is a perfect fit for Rockstar. A genre of cinema with game-like themes, a setting that lends itself easily to the open-world treatment, and one that naturally supports the subjects that have become dominant in studio co-founder Dan Houser’s writing as it’s matured. The old west offers a particular vision of masculinity in a time of crisis, and deals in the collision between the individual and society. It is also an opportunity to diagnose the state of life in modern America by exploring the fable of the nation’s creation.

These ideas are present in Grand Theft Auto, of course, but Rockstar’s most successful series is handcuffed to irony. In 2010, making a Western presented the studio with an opportunity to escape this tonal double bind by venturing into the historical and cultural past. The result: Rockstar’s warmest and most earnest game. Red Dead Redemption is set in 1911 in a compacted slice of the south that stretches from the edge of the Great Plains down through Texas – fictionalised here as New Austin – and across the border into northern Mexico.

Modernisation is coming from the east: the first image in the game is of an early automobile being offloaded from a paddle steamer. Protagonist John Marston steps off the boat in a battered cowboy hat and frayed waistcoat, utterly out of place. A few bars into the piano melody that opens the game, a discordant clash of electric guitars cuts across the soundtrack. Bill Elm and Woody Jackson’s score is deeply indebted to Ennio Morricone, but this piece, Exodus In America, delivers its message masterfully. The old west is vanishing, but it is not yet gone. America’s wild history is fading, but its biggest battles are yet to be fought. 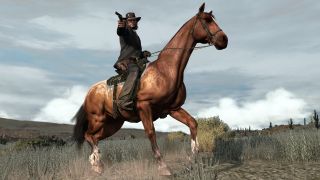 Marston is a former bandit returning to the frontier on the promise of a pardon for himself and his family, his wife and son, although their safety is contingent on Marston capturing or killing the leaders of his old gang. We are not told this outright: it’s something the player learns, piece by piece, as they guide Marston through an opening that is remarkable for its restraint. It takes around an hour for Red Dead Redemption to get to the point where it asks you to shoot somebody. That time is spent subtly introducing Marston’s two ‘lives’ – the unrepentant cowboy and the reformed homesteader – and teaching the player the basics of horse riding, travel, and gunplay.

The setting for this tutorial is a ranch run by Bonnie MacFarlane, a young woman who discovers Marston by the side of the road after he is shot by the very men after whom he’s been sent. Bonnie is one of Red Dead Redemption’s greatest achievements. As the game works to establish its various moral dualisms – the notions of savagery and civilisation that inform everything from the concept of manifest destiny to the game’s own morality meter – Bonnie questions and deconstructs this system as only an outsider can. In their first few meetings, Marston will not reveal anything of his history or mission.

“You are being deliberately obscure as a substitute for having a personality,” Bonnie chides him, fondly slicing through not only Marston, but also the Western itself. The Western is about heroes, usually men, who enter the picture from one side and leave on the other. Its defining images are the ride into the sunset and the middle- distance stare. It is about unknowable people, and this presents challenges when transferred to a medium where the viewer is in control of the lead character at all times. It’s difficult to have John Marston leave the picture when he is the camera’s only focus. 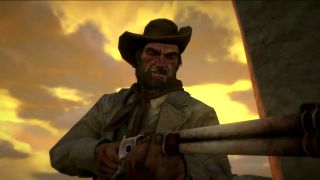 His early relationship with Bonnie provides Rockstar with a deft solution to this problem. The player acts as a third party in a romantic scenario that is not, in effect, a romance. Marston is married, and so Bonnie’s growing interest is impossible to reciprocate. For the player at this point, however, Abigail Marston is an unknown quantity – it’s Bonnie’s perspective that we adopt as we learn about John, and it’s John’s relationship with Bonnie that is defined by the player in those early missions.

The game presents opportunities for heroism that aren’t violent, but are rooted in the types of things Marston is good at. In one early mission, he chases down and breaks a wild stallion that bolts from its pack. Later, in A Tempest Looms, the player is asked to ride ahead of a herd of stampeding cows during a thunderstorm. The stakes here are not immediately deadly for either Bonnie or her ranchers, but the loss of the herd would doom the ranch eventually. The mission demonstrates the fragile balance of life in the west while framing Marston as a solution to that fragility, rather than part of the problem.

Crucially, it also gives the player freedom to determine the extent of Marston’s heroism. Like the horse riding, which is unintuitive at first but reveals finesse with time, herding these cattle is not a binary proposition. It’s possible for you to lose a substantial amount of the herd without failing the mission, and Bonnie’s reaction is the way the game subsequently rewards or punishes the player for their effort. 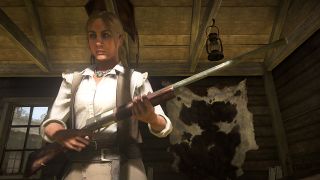 Even as Marston’s eyes are looking elsewhere, the player’s are locked squarely on this place and this relationship. What soon becomes evident is that the MacFarlane ranch has a Marston-shaped hole in it. When Marston leaves Bonnie for the last time near the end of the game, he is riding off to meet a tragedy that is grounded in his dual nature. Through Bonnie – and the future that she wants for him, but that it is impossible for him to have – the game intimates an inaccessible third option.

Redemption binds him to a destiny that is always just out of shot, and it’s this that makes him a Western hero rather than a shooter protagonist with a cowboy hat on. An implicit suggestion here is that the player is focusing on Marston’s story, but this isn’t necessarily the case; this is an open-world game, and other options are available. The game’s toolset allows Marston to run off and wear a top hat, to hogtie villagers and leave them on railway tracks, to hunt coyotes in perpetuity. Played like this, the game is perhaps most notable for its scenery and its audio design.

There’s the sweeping expanse of the Great Plains, the sun rising over mesas in the far south, the sting of vibrato guitar and the sound of the wind in the long grass. It’s still a great game in these circumstances, but its greatest moments occur when these strengths are used to support a directed narrative. In one unforgettable sequence, Marston rides to Mexico for the first time as Jose Gonzales’ Far Away plays for the only time. The section matches the song to the length and shape of the road, and while the device is pure cinema, there’s something of the magic trick to the way it’s folded into an interactive experience. 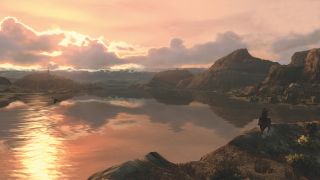 Later, the same trick is applied to Jamie Liddell’s Compass as Marston rides hard from the mountains down to the Great Plains, where his family is waiting for him. If Redemption were consistently this deft, it would be one of the best games ever made. Unfortunately, it’s let down by a sagging middle section as well as characters and side plots that don’t contribute to the overall sweep of the thing.

After that dazzling introduction to Mexico, Marston fights for both sides in a civil war and guns down hundreds of men – most them while firing a Gatling gun from the back of a train. The player’s choice of faction is meaningless, however: both sets of missions need to be completed, and Marston’s tenuous reason to be involved at all turns the section into little more than padding. If the game ended with the completion of Marston’s mission across the border, it’d be a case of a best-in-class opening that couldn’t quite develop into a coherent game.

After Marston’s time in Mexico, however, Rockstar achieves something remarkable. The game’s pace and focus tighten, and the player’s aims become aligned clearly with Marston’s for the first time. As you fight initially to redeem his inner bandit and then to reclaim the life he has chosen, you explore the breadth of the character. The ending that follows is so affecting, and so accomplished in its execution, that it has arguably not been bettered since, even by its sequel, Red Dead Redemption 2. 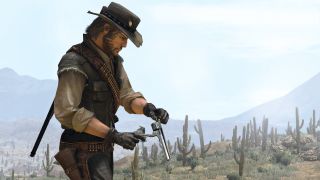 When discussing the game’s artistic successes, it is tempting to celebrate individuals, but this version of the old west wasn’t conquered by a handful of heroic pioneers. It was built, grain by grain, by the team at Rockstar San Diego. This staggering technical achievement is the scaffolding that supports everything else that Red Dead Redemption subsequently accomplishes. That this is the case for big-budget games in general is an even greater reminder of the need to remain conscious that these are ultimately collective works, not individual ones.

The myth of the old west suited Rockstar. It reflected something of the developer’s own individualism, an attitude to creativity that emphasises style, strength and independence. But a myth is still a myth, and while the notion of a lone star is a tempting romanticisation of Redemption’s origin story, another American idiom – e pluribus unum, ‘out of many, one’ – is closer to the truth.

Blood will be Spilled Review

No Man’s Sky Confirmed For Xbox One