And Railjack, the Warframe spaceship expansion you never knew you wanted

Warframe is going to Venus, and yes, you should care even if you’re not already super into Warframe. The next big expansion for the game is called Warframe Fortuna, and it’s planned for fall – though I got an early look at TennoCon, the day-long official convention hosted by developer Digital Extremes. I’ve only put enough time into the game to consider myself moderately literate with Warframe’s multifaceted depths (still working on growing my first space dog), and I’m already excited to see where Fortuna is headed.

Venus is the biggest area in Warframe by far 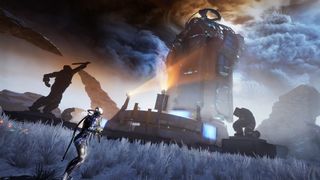 Last year, Warframe added its first open-world area with the Plains of Eidolon update. Compared to the claustrophobic ship corridors and segmented canyon interiors players were used to it before, it was huge. Plains of Eidolon can all fit within the initial basin you see when you step out into Venus. Calling Orb Vallis “otherworldly” is kinda redundant if you’re familiar with Warframe’s idiosyncratic aesthetic, but it looks like a cool place to explore. Literally cool, because it’s studded with giant cooling towers that make the second planet from the sun icily habitable for the business-minded Corpus faction. Dedicated Warframe players will be happy to hear that the Corpus bases you take out as you explore the world also become temporary outposts, so you don’t need to return to the city to take care of quick business like turning in bounties.

You can ride a hoverboard 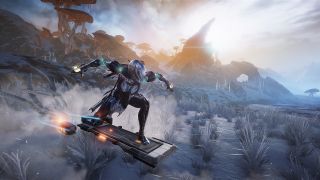 HOVERBOARDS. Warframe never refers to anything by a normal-sounding name, so the new one-rider vehicle is actually called a K-Drive, but it is one-hundred percent a hoverboard. They’re arriving with the Fortuna expansion, and they’ll be an ideal way to explore the vast reaches of Venus. Sure, you could pull out the same Archwing jetpack you use for space missions and to fly around the Plains of Eidolon, but you can’t do gnarly tricks in an Archwing. And because it’s Warframe, the kind of tricks you can pull off depend on what kind of K-Drive you have and how you customize it. Everything is customizable in Warframe, though many of the looks do tend toward “enchanted crustacean.” 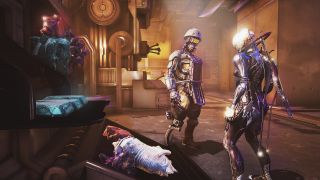 Warframe is ostensibly a shooter, but really it’s a game about doing all kinds of weird crap in space. Exhibit a) a sprawling sidequest where you track down endangered Venusian species and preserve them. And that’s not coded jargon for killing hostile creatures then pressing a button on their corpses! After you sign up with the Fortuna colony’s resident conservationist, you’ll get a radio call when you’re in the region of a potential specimen – potentially indicated by a fresh pile o’ animal scat – then follow its tracks for a while. This is the best part, maybe of the whole expansion: whatever strange noise they make off in the distance, you have to pull out your space-moose-call and imitate it right back by pushing the mouse or sticks up and down to modulate the pitch. If they go oooOOoooo, however close you can get to going oooOOooo right back will dictate the rarity and quality of the specimen you find. Then it’s just a matter of tranquilizing it and, well, pushing a button on the body. Not everything is gonna be super weird and new. Although… 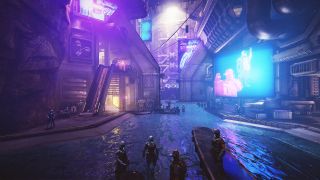 Fortuna Solaris Debt-Internment Colony is an involuntary home to cyborgs who are deep in debt to the Corpus. They’re all dangerously close to foreclosure – not on their homes, but on their bodies – and they’re working off that debt by maintaining the Corpus’ terraforming technology. The concept not-so-subtly parallels real-world issues like predatory lending and rampant debt, and Digital Extremes goes all the way with an original chain gang song in Fortuna’s introduction cinematic. It’s surprisingly catchy and the fact that it doesn’t immediately feel out of place and weird says a lot about the multifaceted, “definitely not your standard sci-fi” feel that Warframe has reinforced over the years. It’s also a nice introduction to the grimy underground industrial city that serves as the main settlement of Venus.

It’s the beginning for Railjack, AKA PvE Sea of Thieves in space

I’ve been talking all about stuff in the Fortuna expansion, but Warframe will keep growing after that (and maybe forever, if the last five years are any indication). Digital Extremes revealed that Fortuna will lay the groundwork for what may be an even more ambitious new experience called Codename: Railjack. Basically, start by thinking about it as Sea of Thieves combat in space, leading into all the other Warframe combat that exists. Up to four players board a single spacefaring battleship and head into battle, distributing duties amongst them: steering the ship, firing the turrets, orienting the shields, repairing damaged systems. Then you can launch into space for more direct Archwing combat against the enemy ship, then you can board the ship itself to destroy it from within. In other words, it’s a super-ambitious expansion of the original fantasy at the core of Warframe: space ninjas boarding enemy ships. Unfortunately, Digital Extremes didn’t say how long we’ll have to wait for it to arrive.

How to make money in GTA Online